JobsForEditors November 12, 2018 For academic writers, For copywriters, For editors, For writers 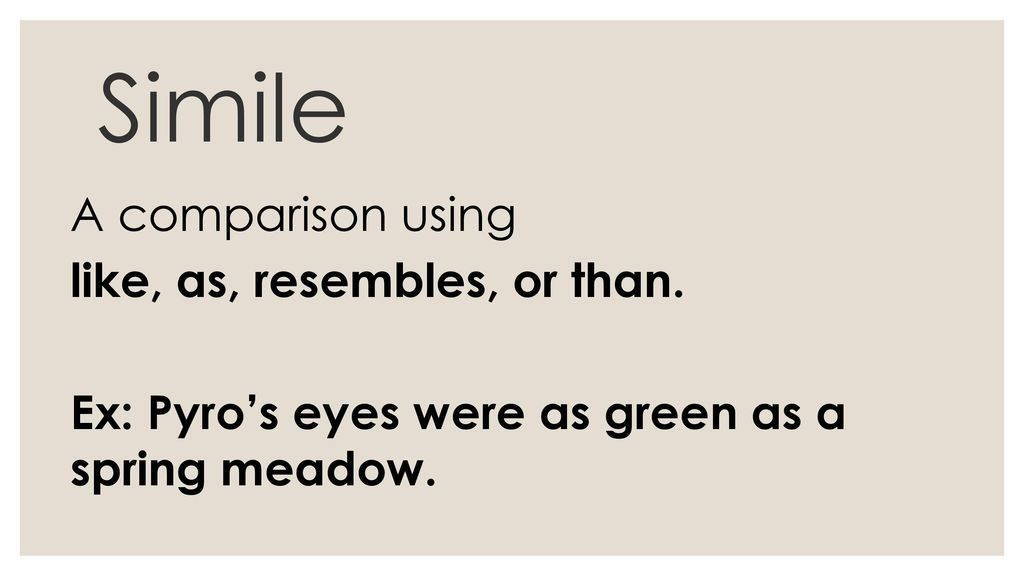 We write to describe our feelings to the reader. We can’t impose a thrilling terror upon somebody by just saying “I was very afraid”. We can’t explain how disgusting a ripped shirt with oily stains can be with “it was very dirty”. When a direct description is not enough, we can play with words. For this, we have personifications, oxymoron, puns, synecdoche, and other figures of speech. But it is the simile that is the most simple, common, and efficient way to make your writing more imaginative.

What is a simile

A simile definition is very simple. It is a figure of speech that is used for comparing two things. When we make a comparison using a simile, we always use the words “like”, “as”, “so”, “than”, “alike”, or “resemble”. These words are important, as there are also metaphors and hyperboles that are aimed to compare things, but they are formed differently. So, the quickest way to distinguish a simile from other figures of speech is by paying attention to whether there is “like” or “as” in a phrase.

You can easily mix up similes, metaphors, and hyperboles from time to time. It’s not that knowing the difference between them will help you to use them properly, or it will have any impact on your daily life, but if you are a linguistics nerd (like we are), you might be interested in knowing how to distinguish them.

A simile, a metaphor, and a hyperbole are figures of speech that make your text more imaginative. The three of them compare things, and that is all they have in common.

These figures of speech have different forms:

Similes are widely used in music, as they help making lyrics more imaginative and bright:

“And they say that alcoholics are always alcoholics even when they’re dry as my lips for years.” – Ani DiFranco, “Fuel”

“I wish I had a woman half as good and true
To keep out of trouble the way he used to do
Someone I can depend on, just like that good old shoes”
– Lyrics from the theme song of the spectacular comedy “Wag the Dog” by B. Levinson

A simile can also be used to make difficult things more comprehensible*:

*A short analysis has shown that an article of 3 pages written by Stephen Hawking contains on average 6 imaginative similes, and that is 5 imaginative similes more than similar texts of the same volume by Michio Kaku, Carl Sagan, and Neil deGrasse Tyson. No offense to these three, but that explains why Stephen Hawking won a Nobel Prize and was considered the brightest science popularizer of the epoch.

Similes are also widely used to create an ironic or sarcastic effect*, or to make a speech richer. To demonstrate these effects of the simile, we decided to use some help from a professional in both figures of speech and humor:

*Actually, there is one thing that is true both for a simile and for a joke. It’s better to have none than to have a bad one.

There is a belief that an article about similes should contain a list of common similes as well. Here you go:

But please. Don’t use this list in your writing if you don’t want to look like a 90-year-old English teacher from an Amish nursery. The similes above are as boring as beans, as common as mud, and as dead as a dodo. Your text deserves more than lifeless clichés.

Let’s try to work on it together. Think of 5 similes with “red as”, “white as”, and “beautiful as”. Write the second part for “eat as”, “walk as”, and “drink as”. Try another track. What can be “as a lumberjack’s beard?” Who can act “like a frightened koala?” Think of the most imaginative and unpredictable similes.

And remember, a simile should be as clear, bright, and easy to understand as rusty nails on a rainy day.