JobsForEditors November 12, 2018 For academic writers, For editors, For proofreaders, For writers 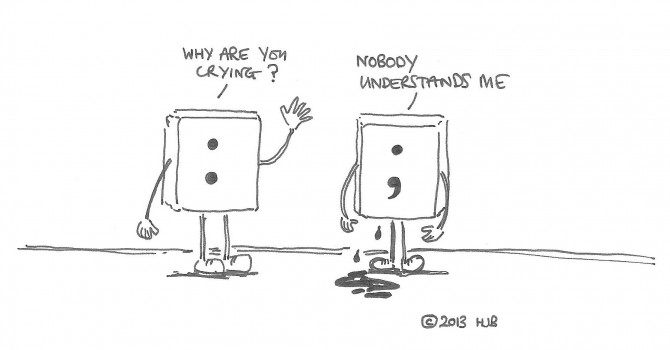 The gurus of writing, as well as text-improving apps, with one voice advise to simplify sentences, get rid of complex ones, and break monolithic ideas into small, monotonous phrases of 5-7 words. Text simplifiers forget how beautiful a sentence may be when filled with punctuation marks, aimed at helping a reader to hear the intonation of an author.

Long sentences can be concise, though only if you skillfully place commas, dashes, colons, and semicolons in it. They help your reader slow down, speed up, and avoid the need to reread the same sentence in vain attempts to understand what it is about, and if there is any sense in it at all.

In this article, when giving examples of semicolons and colons, we will cite the first chapter of “The Hobbit” by J.R.R. Tolkien. We decided to avoid unrealistic sentences composed for academic purposes only, as they can’t demonstrate the variety of applications a colon and a semicolon might have. We chose Tolkien, as his academic level leaves no doubts concerning the purity of his language; his sentences are long, his composition structure is complex, whilst his voice is bright, and his novels are spellbinding.

How to correctly use a semicolon

A semicolon is a comma crossed with a period. This half-half status is what makes it so mighty. Though a semicolon can add comprehension and style, and make your text more concise, clear, and strong, the problem with it is there are no situations when you are obliged to put it, and can’t replace it with a full stop.

There are only three situations when to use a semicolon.

This last remark ruins the concise rules concerning the semicolon, making it again, as it always was, a potent, though not simple punctuation mark in the English language.

When to use a colon?

A colon is not as neglected by English-language students as a semicolon, as there are direct and strict rules of its usage.

Using proper punctuation is a subtle art. It makes an English text look good on paper, and makes your writing sound like music. Punctuation helps the reader to hear the author’s voice; if yours still sounds insecure, put more emphasis on the meaning and the words in your writing, as Ian Fleming, and Ernest Hemingway used to.

If your text is full of ideas, unable to fit into small sentences, you will have to comprehend the charm and strength of punctuation marks. And we assure you: colons and semicolons are some of the most understandable representatives of English punctuation. Appraise them, and remember that to start breaking the rules as enchantingly as Tolkien used to, first you have to get a degree in linguistics, as he did.